Caviar is usually content with taking an iPhone or Galaxy and putting enough gold and gemstones on it so that it looks like it came out of King Tut’s tomb. However, it wanted to do something outside the (gilded) box with the Caviar Origin concept, which is something fairly unique.

The phone takes inspiration from the now-defunct luxury phone maker Vertu. That is the classic Vertu phones, the ones before the unsuccessful attempt to transition from Nokia S40 software to Android. Speaking of, what OS do you think runs on the Origin? 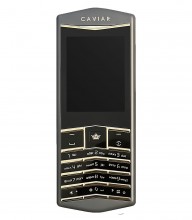 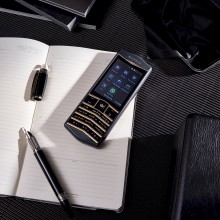 The Caviar Origin looks like a classic Vertu phone, but runs Android

If you guessed “Android” you’d be right. However, Android was chosen mainly for app support – WhatsApp emerged as highly important among Caviar users, other apps will be featured as well. Android’s touch-centric interface was not a consideration.

In fact, we’re not even sure whether the Origin has a touchscreen or not. Caviar redesigned the interface to use soft keys like in the good old days. And, of course, there’s a standard phone keypad for number and text input.

Well, as standard as a gold-plated keypad can be. Speaking of, the company hasn’t decided what materials to use with this phone, the unit you see in the photos and in the video is just a prototype.

The company says that the Caviar Origin will be available in the fourth quarter of this year and that prices will start at $1,000. There’s no upper limit, of course, because the cost of the precious metals and gemstones far outweighs the cost of the electronics.

By the way, this isn’t the first Android phone with a keypad – there are a few previous examples, but all of them are flip phones like the LG Wine Smart, for example. Is there a niche for Androids with an old-school form factor like that? And would KaiOS have been better suited?

Nubia is working on a phone that can change colours

Nubia seems to be working on making phones look beautiful if a little teaser posted on Weibo is anything to go by. There is a new video posted on the Chinese site which has the caption – “The new technology of the Red Devils [Red Magic] gaming phone has been exposed, and the back shell […]

Some scenes from James Bond: No Time To Die might be reshoot with new Nokia phones | Nokiamob

The postponement of the new James Bond movie “No time to die” is old but still interesting news. The movie was initially planned to be released in April 2020, but it got moved to October 2020 due to the pandemic. We didn’t see it premiere in October 2020 either because the pandemic was […]