This story is being continuously updated…. New updates are being added at the bottom…..

Motorola has already updated several of its devices to Android 10. That said, attention is now turning to the next big OS from Google – Android 11 update. The Big G is already working on the preview version ahead of the public beta release possibly in May 2020.

Although Motorola no longer ranks among the top when it comes to rolling out timely software updates on the regular, both minor and major Android OS upgrades, the Lenovo-owned company is suddenly not the worst in the business.

On the brighter side, the company is still making efforts to provide device owners with software updates whenever possible. And below we have an unofficial list of devices we believe will receive the official Motorola Android 11 update. Motorola is known to provide at least two major OS upgrades to most of its devices, especially the flagship Moto Z lineup. However, some Motorola handsets hardly get OS upgrades, more so those in the entry-level Moto E family.

With that out of the way, below are the Motorola devices we think will be considered for an update to Android 11 when the time comes.

You might be wondering where the likes of Moto One Zoom and Moto One Macro are. Well, the two are among the aforementioned Moto One devices that are not part of Android One. With Android 10 their first major OS upgrade, we cannot guarantee that they’ll also get the Moto Android 11 update. Of course, the above list isn’t the final one from Motorola, so expect changes at some point in the future when the official details are out.

No one knows when Google will finalize the stable version of Android 11. But if we consult recent history, the Pixel 4 and co. should receive it in Q3 2020.

Last year, the first Moto device to receive the update to Android 10 picked it up in December, more than three months after Google released the stable version to Pixel devices. Granted, we could see a repeat of the same, although a slightly earlier rollout will be more than a welcome idea.

IST 01:35 pm: Motorola Moto G7 Power devices are not eligible for the Andorid 11 (or Android R) update. But what’s good is that device users can now enjoy Android 11 on their units by installing RevenegeOS custom ROM (unofficial though).

IST 10:10 pm: New developments suggest that Motorola has begun working on the Android 11 update for eligible devices. Unfortunately, Motorola has not yet shared a timeline for the rollout. Check out all the details here.

IST 12:52 pm: Motorola seems to have begun testing Android 11 on the Moto G8 Power since the device has been spotted on Geekbench running the latest Android version. Head here to know more.

IST 01:00 pm: It seems that Motorola has begun testing Android 11 on a few more devices. These are the Motorola Moto G Fast, Motorola Edge+, and the Motorola Razr 5G. More details available here.

IST 11:40 pm: According to Motorola’s software update schedule that it shares at the moment, only a handful of devices are set to get monthly security updates. Fortunately, the list of devices that will get regular updates is a lot bigger. Head here to know more.

IST 05:05 pm: Apparently, Motorola has begun the Android 11 soak test for the Moto G8 Power. The update is rolling out as version RPD31.Q4U-24 with a download size of 1080.5 MB. It also carries the November patch. We’ve added a screenshot of the update below: 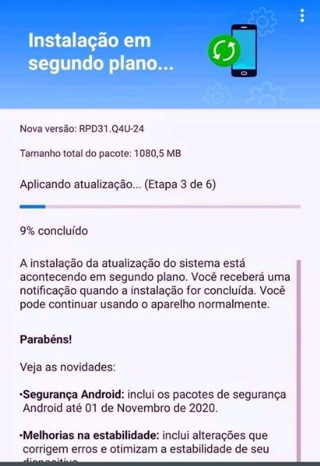 IST 05:00 pm: Apparently, Motorola will be bringing a new Desktop mode function for certain phones with the Android 11 update. The experience will be somewhat similar to Samsung’s Dex mode wherein users will be able to resize windows and have multiple apps running side-by-side.

Further, Motorola may also be planning to implement integration between phones and computers, however, at its current stage, it does not appear to be as feature-packed as Samsung phones with the Link to Windows app as per a new report.

IST 06:10 pm: The Android 11 soak test for the Motorola Edge+ is currently in its final stage according to the Motorola India Fans account on Twitter. While it’s an unofficial report, the page has shared some credible information in the past and thus it’s likely that this news is true. IST 10:05 am: It appears that Motorola has begun the Android 11 soak test for the Motorola G8. A limited number of users are receiving the update as version RPJ31.Q4U-46 which also brings the December patch.

IST 11:39 am: Motorola has updated its official blog with the list of devices that are expected to get the Android 11 update in the coming months. Check out the list below to know whether your Motorola smartphone will get the latest OS update or not: IST 11:20 am: It seems that Motorola may be testing Android 11 for the Motorola One Hyper as it was spotted on a HTML 5 test running on the latest Android version.

IST 10:41 am: Motorola recently released the list of devices that will receive the Android 11 update. While the Moto G8 Plus was not included in that list, Motorola Brazil support has stated that the Moto G8 Plus will get the latest OS update.

However, this is not yet confirmed as support representatives do not usually have the exact information on such matters. Also, there have not been any official announcements from the OEM on the topic so far.

Mat, the official list comes out with the first devices that will receive. The G8 Plus will be the last to receive, Motorola does not set dates or deadlines to not cause any anxiety in my customers. NOTE: If the table below is empty it means none of the devices have received Android 11 beta/stable as yet. The entries will be done as and when the updates go live.

PiunikaWeb started as purely an investigative tech journalism website with main focus on ‘breaking’ or ‘exclusive’ news. In no time, our stories got picked up by the likes of Forbes, Foxnews, Gizmodo, TechCrunch, Engadget, The Verge, Macrumors, and many others. Want to know more about us? Head here.

Want to work for PiunikaWeb? You’ll be glad to know we’re hiring.

[ad_1] Image Source : FACEBOOK Facebook top 2020 moments From US Vice President-elect Kamala Harris to the shocking death of African-American George Floyd, Facebook on Monday listed the top moments of 2020 on its platform that were sorted into six themes. The six themes are Icon, Social Awakening, COVID-19, Global Politics, Environmental Causes and Faith […]

Here’s how much it costs to become a Super Apple Fan; You can’t even guess the amount

[ad_1] In today’s world of gadgets and gizmos, it is really difficult to be a fan of a just one brand. However, we do have Super Fans of every brand across the globe. But being a Super Fan of Apple can be really pricey. According to a report published by CNN, the cost of being […]